Click here for your guide to Richmond’s historic points 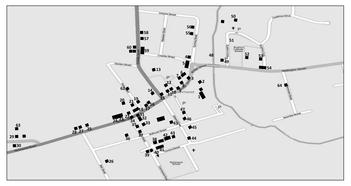 Towards the end of 1803, a party from Lieutenant Bowen's settlement at Risdon Cove explored eastwards, hunting kangaroo and emu. They discovered coal and named the Coal River. Land grants to settlers encouraged settlement in the area. In 1823, the erection of the Richmond Bridge facilitated travel to the east coast and the Tasman Peninsula, as settlers pushed further in search of land. In 1824, the township of Richmond was named, following a complex land deal in which ninety acres of David Lord's Richmond Park estate were exchanged for 1400 acres adjacent to his property.

In the 1820's, Richmond became one of Lieutenant-Governor Arthur's police districts. The gaol, court house, barracks and a watch house were erected. Richmond continued to grow, largely because of its importance as a convict station and a military post.

In the 1830's, Richmond's position on the routes east and south made it a natural overnight stopping place. By the 1830's, several roads led in and out of the town. Inns increased in number. Businesses were established. There were eventually blacksmiths, wheelwrights, saddlers, stockyards, tanneries, a market place, a pound, brick and lime kilns, as well as general stores and other services.

In the 1850's, two daily coaches linked Richmond with the Restdown ferry at Risdon or Kangaroo Point at Bellerive. For most of the nineteenth century, the Coal River was accessible through Pitt Water, and there was considerable trade with Hobart. In 1872, the opening of the Sorell causeway (which caused the river to silt) and the extension of the Hobart-Launceston railway line through Campania had a dramatic effect on Richmond's growth. For the next one hundred years, Richmond was a stable, quiet rural community.

In the 1970s, awareness of the significance of Richmond's heritage began to develop. At the same time, Richmond grew as an arts and crafts centre, with a number of galleries opening. Richmond became recognised as an important Tasmanian tourist destination. More recently, the Coal River Valley has seen a diversification of agriculture, which has included the establishment of a number of successful vineyards.